Lithuanian cuisine – an excellent symbiosis between local traditions and global culinary trends. It is famous for its natural properties, old cooking traditions, and simple but delicious gastronomic masterpieces, without which no celebration, breakfast, lunch, or dinner is imaginable. The dishes itself are heavily reliant upon vegetables and dairy products which are perfect for countries climate, which cannot be found in other nations’ traditional cuisine. If you want to experience real Lithuanian taste don’t miss a chance to try the most unique dishes. Baltic Tours invites you to find some of the most “exotic” traditional Lithuanian foods, to get an insight about cuisine origins and traditions in the text below. 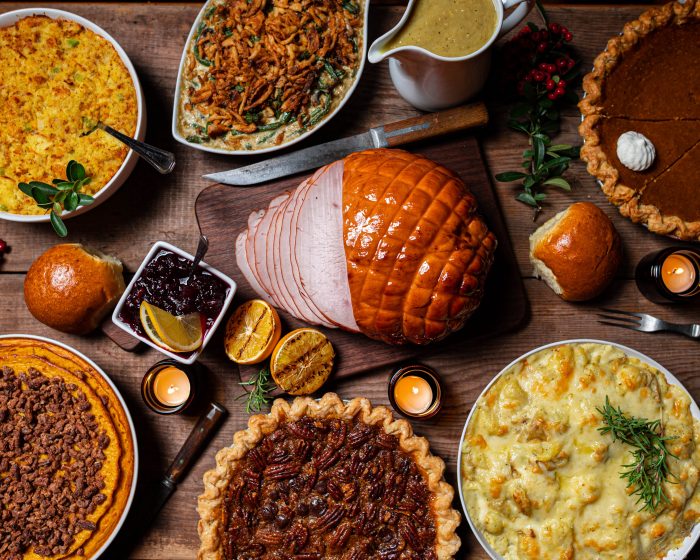 “Cepelinas” – 19th-century Lithuanian national dish that everyone who visits Lithuania must try at least once. The dish is made of potato dough filled with pork and covered in a piece of rich bacon and sour cream sauce. There are many other variants of this traditional dish as every chef has their own recipe. It can be filled with curd, vegetables, fish, mushrooms, grits, and a sauce appropriate to the filling. Therefore, originally the dish was created to feed hungry workers during a freezing season in Lithuania. Today, many restaurants across the country offer this soft potato dumpling dish, which resembles a zeppelin airship. 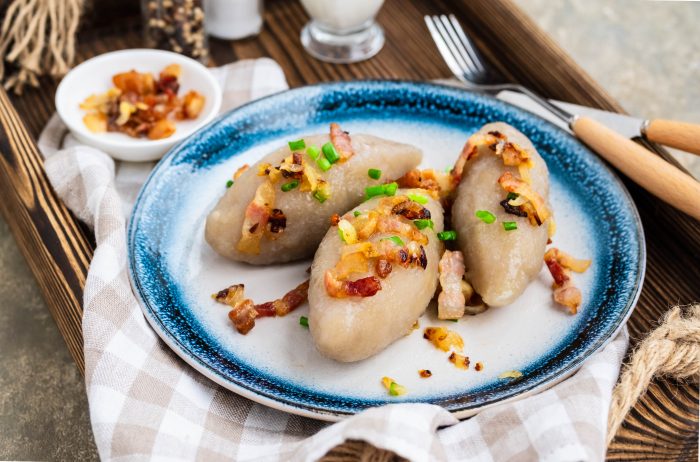 “Vėdarai” – one of the most exotic Lithuanian dishes since the 19th century. The dish was created to fill in the shortage of food and make people full. Thought, “Vėdarai” were made by baking in the oven pig’s intestines with potato pure and bacon filling or in some cases cereal and blood filling. To Lithuanians it is an incredibly tasty and satisfying dish, so don’t rush to judge, should taste it first as it’s always flavoured with sour cream or bacon and onion sauce. 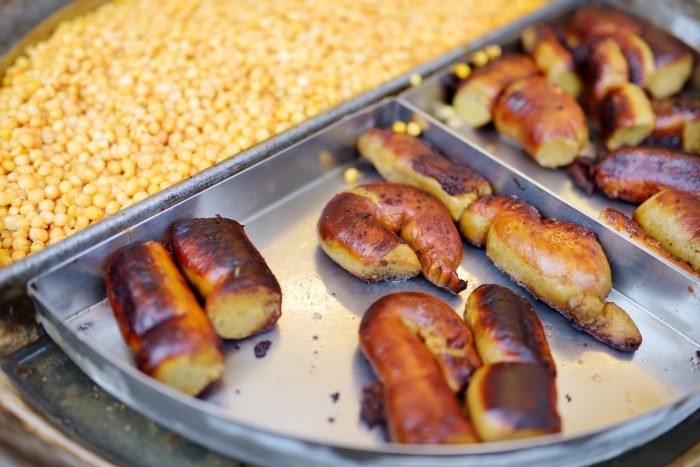 “Šaltibarščiai” – seasonally served cold soup. This kefir and beetroot soup appeared at the end of the 15th century. The soup was made by the Radvila nobility chefs in their estate. The soup was eaten with crayfish tails, fish, or meat. Today this bright pink “barbie” soup is made of beetroot, dill, spring onions, eggs, and kefir – the most important and healthiest product of the soup and in the world. Therefore, it is the most isntagrammable soup ever, so don’t miss a chance not only to fill your stomach but also Instagram gallery or even to feel the real Lithuanian cuisine flavour.

“Šaltiena” – meat jelly, made from boiled bones with meat and vegetables. This dish usually is made during celebrations like Christmas or Easter. It is not difficult to cook and it is delicious when properly made. However, first-time-tasters it might be unusual or even shocking. 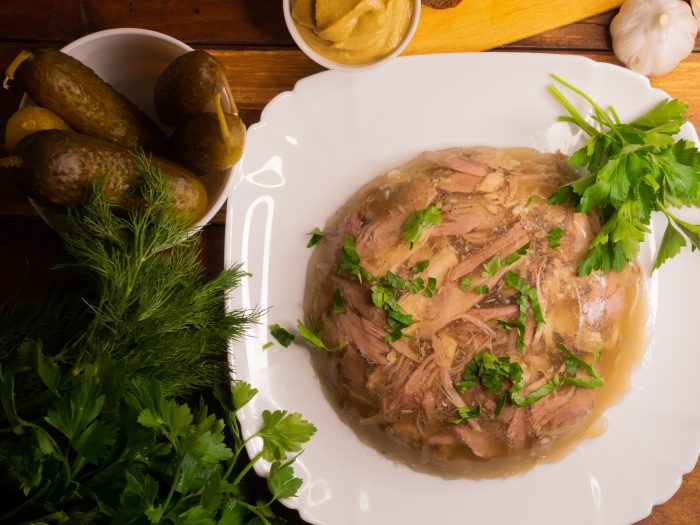 Dried fruits, berries – are collected in summer from gardens and forests to be dried for winter and to be used in various dishes. Apples, blueberries, strawberries, and raspberries are the most popular. They are mostly eaten with oath meal for breakfast or dessert. These days you can find it in every shop or restaurant, which is a great way to protect yourself from viruses, improve your immunity system, and be balanced in your diet. 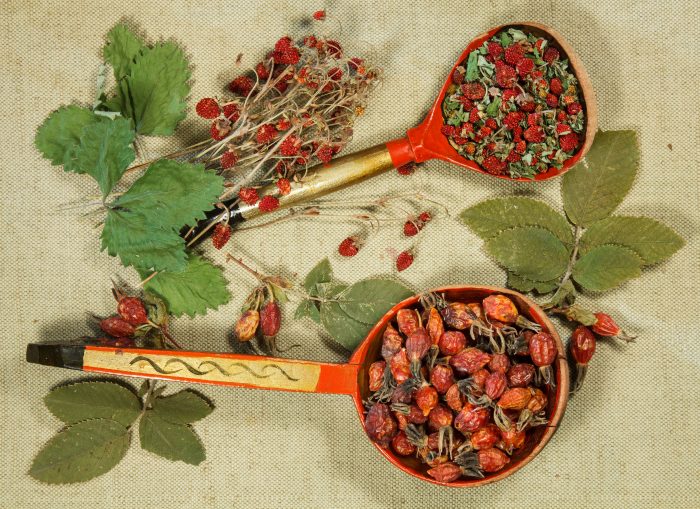 Lithuanian traditional cuisine has developed over the centuries, since 98AD. The recipes created by local people gradually changed and evolved. The change was influenced by the spices and vegetation brought by the merchants and the migration of the people. Most of Lithuanian culinary heritage comes from the 15th-18th century during nobility times and the 19th – 20th century when peasant cuisine formed and flourished. Today many restaurants specialize in historical and traditional Lithuanian cuisine with a modern twist, where everyone can try “exotic” Lithuanian foods.

Why it’s so special?

Lithuanian cuisine is made by using locally produced dairy products and locally grown fish, meat, fruits, and vegetables especially – potatoes, beets, cabbages, carrots, and onions as well wild plants that plays important role in the diet. As well, its filling and keeps you warm during the cold winter season and fresh during hot summer in Lithuania. 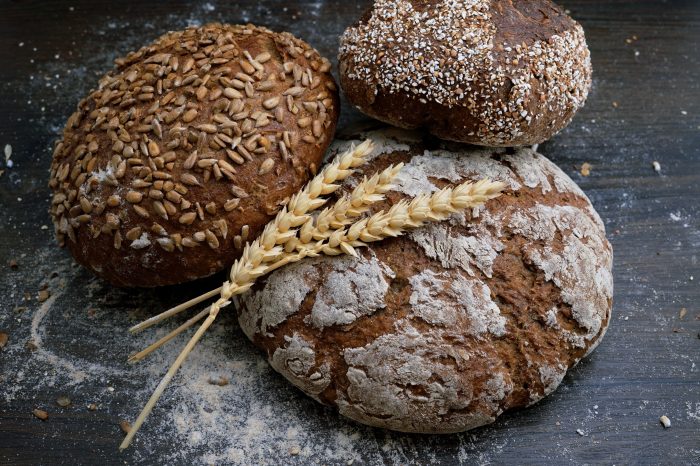 Lithuanian cuisine has deep traditions and is extremely versatile. This is mostly reflected in the menus of Lithuanian regions. For instance, in Aukštaitija people offer potatoes or dough-based dishes, like pork intestine stuffed with potatoes or dark bread. In Dzūkija people mostly cook mushroom and berry-based dishes collected from the national forest. Sulvalkija is a region of meat-based dishes and professionals of meat smokers. In the little Lithuania region, famous dishes are smoked, salted, baked, but it also has dry fish dishes. In Žemaitija, there are various produce-based dishes, especially well-known Kastinis and potatoes platter – Kugel. 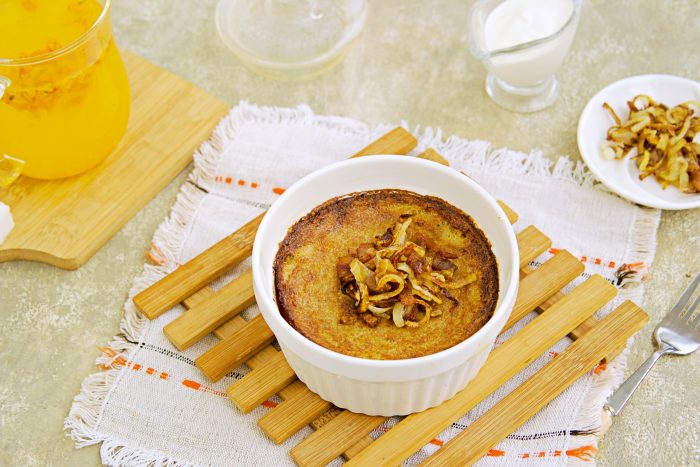 As can be imagined, Lithuanian cuisine traditions are reflected in festivities. Every major celebration is celebrated with a variety of dishes. During Christmas, mostly places fish, mushrooms, and sweets on the table. On Easter, traditionally more “exotic” food is eaten like fried veal, pork head, and stuffed geese, as well, decorated cakes and painted eggs.

Gourmet fiestas and gastronomic events take place in every region of Lithuania all year around. There you will try upgraded traditional dishes like rectangle zeppelins with carrots or milk champagne. Therefore, you will get more insights into Lithuanian culture and cooking traditions.

Do you want to know more? Let’s travel with Baltic Tours and taste Lithuania! 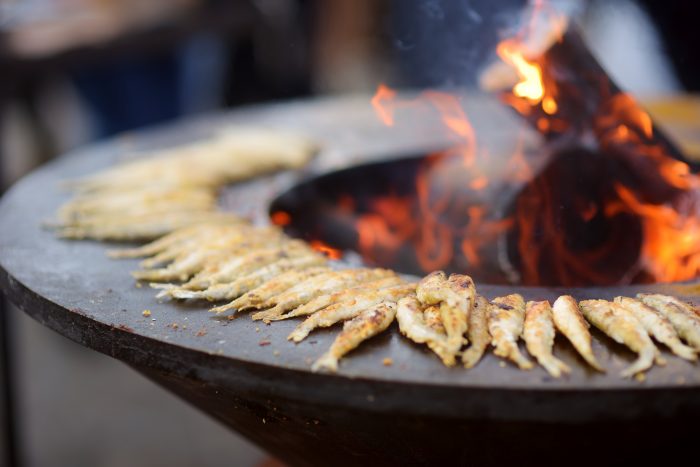