This Roman Catholic church was built in the 16th century and now is located in Old town of Vilnius, next to Vilnia river. It has survived over 500 years without any changes and is now one of the most famous churches in Lithuania, with its own unique architecture and composition.

The story of the church begins in the 14th century when Great Duke Vytautas built a wooden church for his wife. Unfortunately, a fire destroyed it. Therefore, in the 16th century Franciscan brothers rebuilt the church, but this time they have used bricks. Some historical sources tell that it was made from 33 different kinds of clay bricks. Surprisingly, St. Anne’s church hasn’t changed during 5 centuries.

A legend in Lithuania says that Napoleon Bonaparte was so fascinated by the beauty of the church, that he wanted to take it back to Paris in the palm of his hand. In contrast, the reality was not so fascinating: during the march of the Napoleonic army through Lithuania in 1812, the church was consigned to the French cavalry forces. However, Napoleon did mention in a letter to his wife that “Vilnius is a very beautiful city”.

The interior and exterior of the church are dominated by the Gothic style, with some elements of Baroque. If you took a closer look at a church, you would see letters A and M. It is thought that they stand for the Latin Ana Mater Maria or Ave Maria. Some experts claim that the facade with 3 towers is composed of the Pillars of Gediminas. 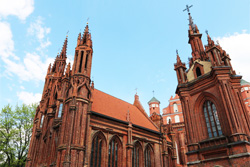 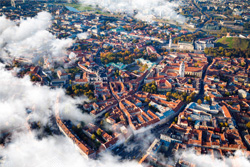 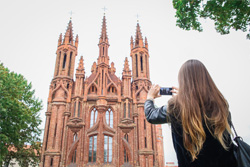 This church stands next to St. Anne’s church. It is a different architectural style and it is much larger. According to legend, the monks of Bernardine were saying such good sermons that there were crowds of people coming to listen to them. That’s why the church is so spacious. During the 16th century, the church was incorporated into the defensive wall, so don’t be surprised if in the wall you will find openings for shooting.

In the 19th century architect Nikolajus Čiaginas designed the Neo-Gothic bell tower because previous bell tower was demolished due to the construction of new street. Now it is possible to visit the Gothic bell tower. You can climb up the round staircase to the height of 17m. There, you can explore the wooden roof structure, view the arches of the church and the panoramic view of Vilnius.

St. Anne’s church is unique in Vilnius Old Town. It is not hard to notice this deep-red colored church in white and rosy baroque style of Vilnius Old Town. The church’s architecture impresses everyone who visits it, so don’t miss your chance and book your tour to Vilnius today!

The Baltic Lifestyle and Gastronomy in 11 days

The Best of The Baltics + Helsinki in 10 days

The Best of The Baltics + Baltic Coast in 8 days